I really enjoy living where I live. Our farm is about ten miles from the nearest gas station and I can only see one neighbor from my house and that is in winter.

One downside is that the rural nature of the area seems to encourage people who want to discard pets, especially dogs, to drop them off here and then drive away, and I think there is a place in the lower levels of Hell for the people who do.

Luckily, it doesn’t happen often, but we think it happened again this weekend.

On most Friday nights you’ll find us a Virlie’s Grill for dinner. Friday is “grill night” and since I rarely feel like cooking at the end of a long work week, it has become a habit.

Very near our house are two large, beautiful pastures used for raising cattle. This time of year the cows are moved to a third pasture so that the grass can be harvested for hay. No one tells the deer, however, so this Friday on our way home the headlights picked out about twenty pairs of orange eyes staring back at us. What we didn’t expect was to see, a few moments later, another pair of eyes in the middle of the road.

At the intersection near our mailbox (we live off the main road so all of our mailboxes are grouped together) there was a German Shepard. Now a few weeks back I had seen just such a Shepard in the road about a mile away. I stopped to investigate and met a very friendly dog, but he had on a collar and I believe he belonged to one of the newer houses that had recently gone up. There was no contact information on the collar so I left him there and figured if I saw him in the road again I’d investigate further. I did see him once again, but off the road in a yard, so I guessed he was right where he belonged.

I assumed this dog was the same one, just out for a walkabout, and didn’t think much of it.

That was until Saturday when Andrea and I headed into town and the dog was still at the intersection. We had an appointment but made a note that if it was still there when we returned, we’d figure out what was going on.

The dog was still there, so we stopped. I realized that this wasn’t the same dog I’d seen before. The first dog was very friendly and this one was extremely skittish. You couldn’t get close to her, but she also wouldn’t run off. One of my neighbors had put out some kibble and water, so it was obvious other people had tried to help the dog, and the lack of a collar didn’t bode well. He was also a she, and this dog was a lot lighter in color (the dog I’d seen before was black and tan, this one is more black and sand). We spent about 30 minutes trying to get the dog to warm up to us, which included calling out in both English and Spanish, and Andrea even went and got the truck in case we could get her to jump in. She was very interested in the truck, but showed no interest in getting in it.

We gave up and went home. Andrea researched how to befriend stray dogs and found out we were doing it all wrong. Apparently the trick is to stay in proximity to the dog but to ignore it and wait until it comes to you (reminded me of dating). Andrea ended up taking a nap (she had pneumonia a couple of weeks ago and still isn’t 100%) but I couldn’t let it rest, so I went back out in the truck to give it another try.

I sat there for an hour or so in the truck. I had both doors open and a couple of treats. She showed no interest in the treats (even when I left them near her water bowl) but I did get her to come up and smell my hand before backing off. I still couldn’t get her to trust me.

Now, like many Americans we tend to eat turkey on major holidays, and in Andrea’s family the turkey is smoked. We were preparing one for Easter and she got the bright idea to take the leftover scraps to see if that would tempt the dog. I put them in a bowl and headed back out in the dark to give it another try.

This time I parked the truck and sat down on the road with the bowl next to me. She was very interested but still afraid to come too close. About twenty minutes into this attempt a car came down our road, and since I was pretty much in the middle of it I thought I should turn on my flashlight and stand up. It turned out to be my neighbors and as we were talking about the dog I could see her out of the corner of my eye approach the turkey. She took a bite and then I thought we had a chance.

I slowly reached over and picked up the bowl (I didn’t want her to wolf the whole thing down) and as my neighbors drove off, and I sat back down in the dark. This time she came right up to me and took another piece from the bowl. I was then able to feed her by hand (she was very gentle and didn’t try to bite my fingers off ) and once I could pet her I knew the hardest part was over. Soon I was able to put a lead around her neck and I got her to hop up in the truck with no problem.

We are lucky to have on the farm a very nice fenced-in dog run. We usually let our dogs roam (they stay close to the house) but on occasion we keep them in the run, which is also attached to a huge dog house we call the “Taj Ma Dog” (you can stand up in it). It was the perfect place to put this dog for the night and we could rest easy that she wasn’t sleeping another night in the road.

She’s a beautiful and delightful dog. We’re not sure how old she is, but she looks purebred German Shepard. Once she warms up to you she’s extremely friendly, and she is in such good shape that someone must have taken care of her. I’ve only heard her bark once (there was a rare siren in the distance) and the only other sound she makes is a little whine when you leave her alone. 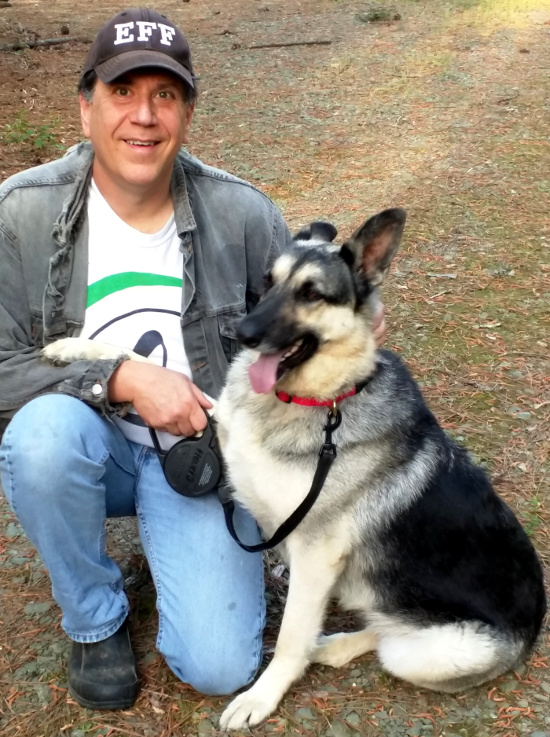 While we haven’t decided to keep this dog, we did decide we needed to give her a name, since “dog” just wasn’t working. We tend to take a long time to decide on an animal name, and our dogs are usually named after gods and goddesses. Our first dog was a Schipperke we called Anubis. Our Doberman mix who has taken down full grown deer is named Freya, and our all-black (melanistic) Doberman is named Kali.

We were thinking about this dog, who is obviously smart and beautiful but painfully shy, when Andrea hit on Auri. Auri is a character in the Kingkiller Chronicle by Patrick Rothfuss. It was perfect.

I really don’t like naming dogs with similar sounding names since they can’t tell them apart when you call. Auri is close to Kali, but damn it, it is perfect so it stays.

This morning I took her to the vet to check for a microchip, but she doesn’t have one, and so we are doing our due diligence to see if we can find the owner. I don’t have high hopes but we have to try. I’m not sure if we’ll end up keeping her. We like dogs with three main traits: 60-80 pounds, short hair, and no tail. At 70 pounds she is fine on weight, but that hair may be a problem in our North Carolina summers.

What I do know is that she’ll end up with a good home and she doesn’t have to worry about sleeping in the road again. Now if I can just get her comfortable enough to stop trying to bury her food …